A better onboarding tool for Koha

In November 2016 Mika Smith and I started as Koha interns at Catalyst. We were given an exciting opportunity to help library administrators all around the world by redesigning the installation process of the Koha library management system.

Koha users have found the existing web installer confusing and difficult to use. There were three key issues that needed attention:

Our job was to make this installation process fast, easy to follow, and warning message-free. The solution was to improve the web installer, and develop a new feature - an onboarding tool to set up Koha properly so when the user logs in they are not faced with multiple warning messages. We collaborated on this project together until Mika left Catalyst to go to summer school in late December, and I have continued working on it since then.

The development of the onboarding tool was challenging and rewarding. Our tool should make the process of installing Koha much less confusing for users all around the world, but learning Perl for the first time while trying to understand and write appropriate code into our onboarding script was certainly a steep learning curve.

The end result was a massive patch (including 4341 lines of code added and 2469 lines of code removed from the Koha master version) which is currently going through the QA process. Other patches which depend on it are already being developed.

I have received a lot of feedback from the Koha community about the patch as it goes through the QA process which has been useful, and has taught me a lot - for example, which Perl pragmas best suit my scripts.

Our project produced the following deliverables:

The updated web installer provides the user with the choice of basic or advanced setup mode. The basic setup, which is recommended for new users, selects all data values necessary for a fully functioning Koha instance by default. The advanced setup mode, recommended for experienced Koha users, provides the user with complete control over the data installed in their Koha database - it is the current web installer. 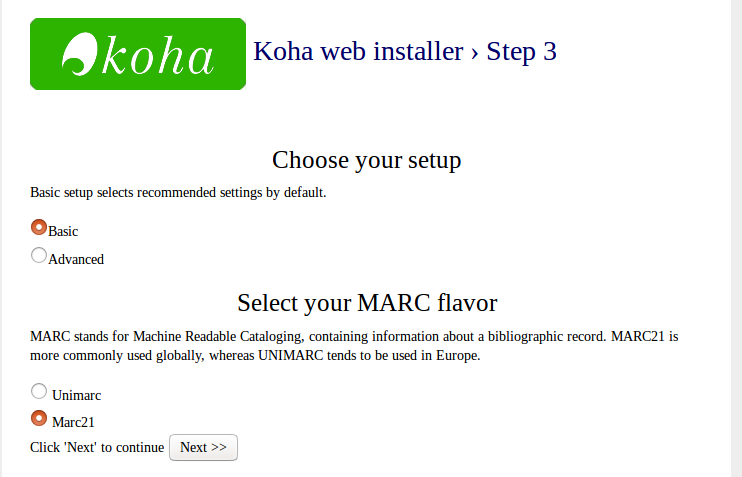 After the user has completed web installation, they are redirected to the second part of the patch: the onboarding tool.

The onboarding tool has several functions. 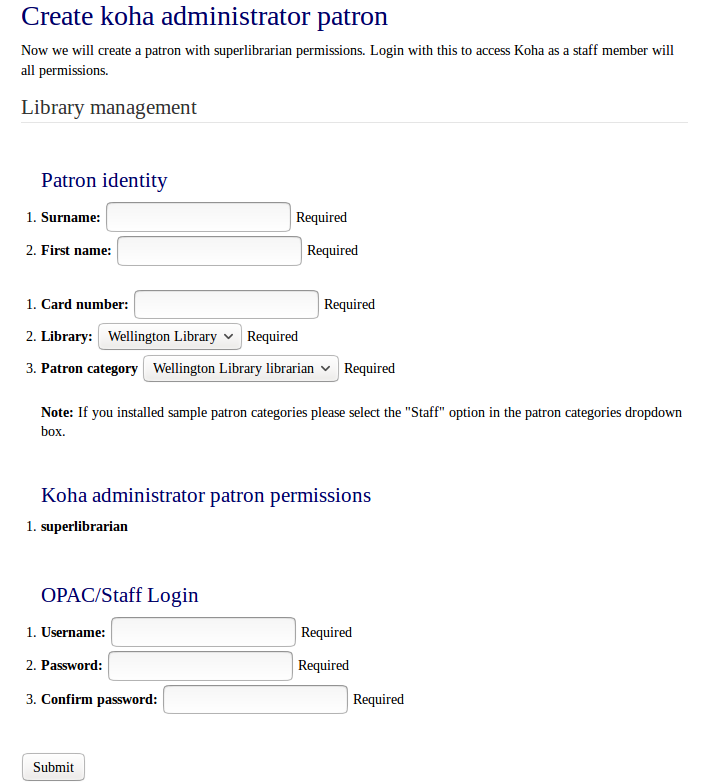 Having enjoyed the rewarding process of developing the onboarding tool so much I am currently working on additional enhancements, one of which is  adding two further interfaces allowing the user to learn more about the different services they can use with Koha (SIP, and LDAP) and the other allows the user to further configure their Koha instance.

Our patch helps the user set up Koha in a fast and hassle free way; it even educates new users on where to create libraries, patron/borrower categories, patrons/borrowers, item types, and circulation rules in the Koha staff interface. Importantly it stops the situation of the user logging into Koha for the first time only to be faced with multiple warnings. Instead, everything is set up for the user because they used the onboarding tool, so they can log in using their unique user account and get straight to work.

Special thanks to the Catalyst Koha team for their support and guidance.

To find out more about this project, please visit https://koha-community.org/manual/installation/html/

More about Koha at Catalyst