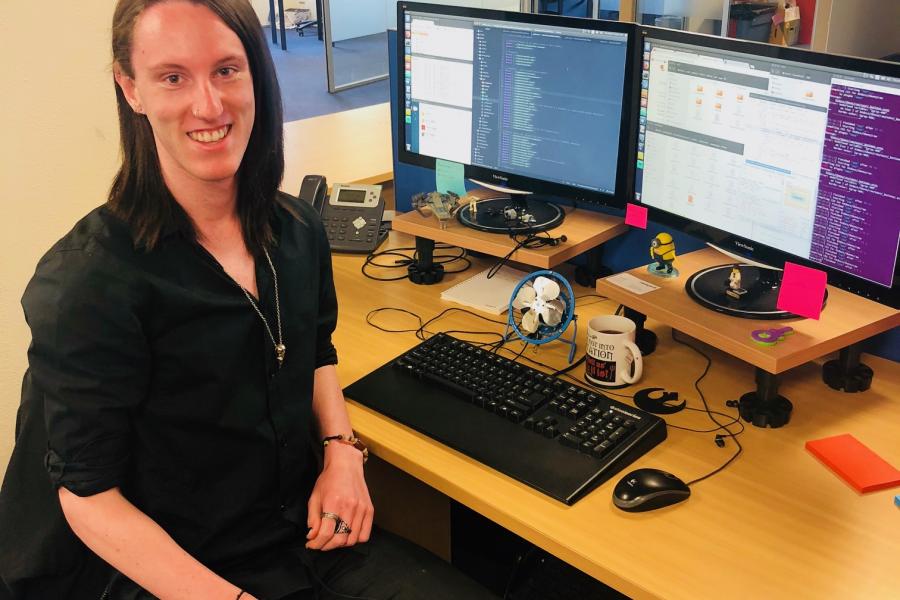 I caught up with Liam, one of our front-end developers, about his experience going from an Open Source Academy student to a Catalyst employee.

What year was it when you were an Catalyst Open Source Academy student?

What school did you attend when you took part in the Catalyst Open Source Academy?

I was just starting year 13 at St Patricks College in Silverstream.

What did you enjoy most about the week long Academy? At the end of the week, did you leave feeling enthused and inspired?

The academy was a lot of fun, I got to learn a lot of cool new things and experience all the different parts/teams of a IT organisation. I had previously assumed that IT was only developers and while development is still where I want to go, it was interesting to find out that there was so much more.

At the end of the week, I was super happy with what I had accomplished. I got to work with the Piwik team to make their very first theme (which currently has over 7k downloads!)

From here, did you study before joining Catalyst? If so, what qualification? Or did you join as an intern part time while completing study as well?

I joined Catalyst part time when I was in year 13 of high school (6 months or so after the academy). Since then I have started a Bachelor of IT degree with a double major in programming and software engineering at WelTec. I am currently in my third year of study.

What have you enjoyed most so far about working for Catalyst?

Catalyst has a very relaxed working environment. It is easy for me to fit work in around my studies.

The people I work with are super friendly and cool!

Catalyst provides so much for me; be that pizza at pizza Thursday, drinks at beer o'clock, numerous team outings, a computer I can install what I want on (within reason obviously), a day to do whatever I want at the Catathon, or even the scholarship they graciously awarded me to help with my study.

I love my team, and I love Catalyst.

Do you feel like being an ex Catalyst Open Source Academy student was an advantage when it came to securing employment?

Definitely. I initially applied for a python role here and was asked to come in for an interview. But Don and Kristina remembered me from the academy because they more or less offered me a job on the spot as a front ender on the Mahara team. I assume creating a theme instead of solving bugs like everyone else at the academy made me stick out a bit!

Have you been involved as a mentor for the Catalyst Open Source Academy since becoming an employee? How did you find that? Was it different being on the other side of it?

I have helped out at two academies since, mainly with the UX/front end side but I have also helped with the testing part . It was fun! I enjoyed being able to help out the students and it was cool to see them working away at something they clearly enjoyed doing.

How would you describe the culture at Catalyst and how does the IT work environment differ from what you imagined it to be?

Catalyst culture is very unique. It's very easy to walk up to someone and start talking, be it work related or not. Everyone is cheerful and best of all, there's no dress code, I can turn up in a suit and tie one day, and a fully black dress with chains spikes and a face full of make-up the next and nobody cares (... so long as I'm not meeting any clients).

Has IT always been an area in which you wanted your career to go?

As a 10 year old I wanted to an inventor - It wasn’t for a few more years I learned mechanical engineer was a much closer description of what I wanted to do (and something I could actually look up in career books too). I used to play around with a lot of Lego and when I was about 15 I got a Lego mindstorms kit which was like a Lego set with a computer in it you could program (via very simple drag and drop blocks) to do whatever you wanted. This made me get into more of the programming side of development and I've stuck with it since.

If you had to say one closing statement to students considering doing the Catalyst Open Source Academy, what would it be?

Do it! You will have an awesome time, learn some awesome new skills, make new friends, and maybe even get a full time job at arguably the coolest place.