Every summer Catalyst hosts students of school years 11 to 13, from all around New Zealand and acts as a hub for growing understanding, knowledge and practical skills in open source technology; Friday, the 18th of January 2018, marked graduation day for this year’s budding technologists. Two weeks of intense learning and mentored project work, shared and celebrated with presentations and pizzas.

The Open Source Academy is a two-week course made up of two components: learning and application. Week one is all about providing students with a comprehensive understanding of each component to consider when building an application. The second week is about application. The students pick one of the project platforms; Koha, Hot Potato or SilverStripe. Then teams are introduced to the project they will work on during the week. The students then set up their development environment before commencing work. This might include locating tasks through such issue trackers as Github and Bugzilla, communicating with people around the world, and creating patches to improve the usability and performance of their chosen project platform, with the goal of contributing to the main source code. 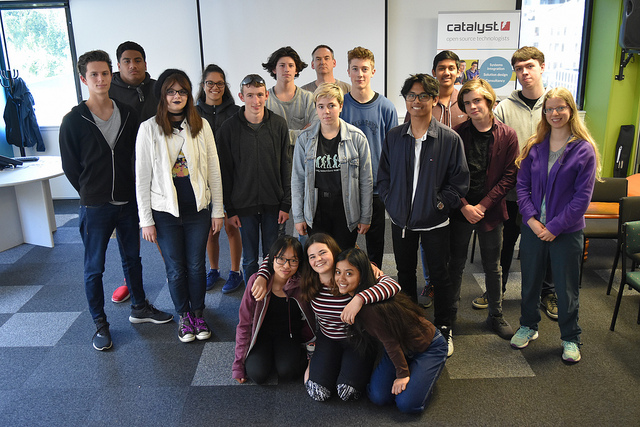 Hot Potato is a new project, a message broker for monitoring systems. It sits between monitoring systems and messaging providers to ensure consistent relaying of messages to on-call staff, with more freedom and flexibility than a pager system can provide.

The Hot Potato team were set an array of tasks including; creating a user set-up interface, a password strengthening suggestion feature, and adding a change log - which would allow for users to further understand the programme's capabilities. Perhaps most impressive was the task set to facilitate language translation, but the team did not stop there. The budding developers went on to provide full Italian and German translations.

The two Hot Potato mentors, Zac and Rhys are both Open Source Academy graduates, and now work part-time at Catalyst, were impressed with the team.

Zac said, “At the beginning, the students would call for help at the first struggle with their coding; however, they quickly learnt to persevere – often solving problems independently and expanding their understanding in the process.”

Rhys added, “Tasks that I would class as highly intricate and difficult, the team completed. I was impressed with the teams' quick ability to learn and adapt.”

Koha is an open source integrated library system, and is used in over 5000+ public, academic, government and special libraries all over the world.

The Koha team of students were given a list of bugs that either needed to be tested, fixed, or for a new feature of code to be written. The Koha team went beyond the knowledge they had gained in school, trying challenges that required using Perl, Javascript, or Template Toolkit. Some impressive work included writing new system preferences and unit tests, improving options for other languages, and enhancing interface accessibility. A few students also ‘rescued’ patches, which means improving someone else’s unsuccessful attempt at a patch.

The Koha mentor, previous Open Source Academy graduate and now part-time employee - Aleisha shared “I was really impressed the challenges the students took on [...] I am so proud of everything they all achieved and was stoked when they started becoming independent, learning the process, and helping each other.”

SilverStripe is an open source Content Management System (CMS) and framework that is used to create and maintain websites and web applications.

The SilverStripe team of students collated their tasks using GitHub, which included fixing bugs and building new features. The students thoroughly enjoyed creating a gallery feature, as well as using the ‘UserForm Module’, to visually interact and manipulate the framework in contrast with typical code driven techniques. Two developers from SilverStripe came by to encourage, and thank the students for their efforts and work. Russ and Elliot from the Catalyst SilverStripe team mentored this group, and both noted how the students became more enthused and engrossed in the tasks as the course went on.

As students reflected on their Academy experience they shared:

“I liked contributing to the project and seeing the changes we could make to things like Koha, and whenever I fell behind people helped me and were was so nice,” Olivia said.

“I enjoyed the academy for all the teachings, and it was delivered really well, I hadn’t learnt much of the content in school,” Ethan said.

This is the 9th Academy, and more than 170 students have now participated in the program. The next Academy will open in January 2020, with applications being accepted from August 2019.