Who would have thought, that a piece of software originally started in Wellington, New Zealand, would now be in use in almost every country in the world. I certainly didn't in 1999 when I first started work on Koha, but I am very happy that it is, or I would have never had the opportunity to travel to Nigeria for Kohacon, which was held in Ìbàdàn, Nigeria from 19-25 October 2015.

Koha is a flexible, scalable and open Integrated Library System (ILS). A Kohacon is held every year in a different location to talk about how Koha is being used and how users can contribute. Koha is now one of the most used ILS systems in the world, with entire countries (Turkey for example) being run off a single installation. What you might not know, is that in the developing world there are many libraries that are not automated at all. In Nigeria (and other parts of Africa) Koha is helping to change this.

This brings us to Kohacon15 - Nigeria.  As is the trend for all Kohacon, this was the best one yet. Not only was the venue great, but so were the people and the presentations. The conference was held in the grounds of the IITA (International Institute of Tropical Agriculture) which was a beautiful location. 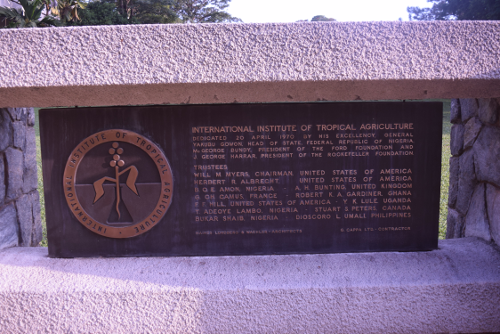 The IITA is on a 10,000 hectare campus, a third of which is virgin tropical rain forest, the rest is labs, fields for crop growth, a lake, housing and some botanical gardens.

There were around 60-70 participants, (some were only there for a day or two), which was a great turn out, especially given some of the negative and undeserving press the country has had. It was a shame there were only 2 of us non-Africans that attended, but I am exceedingly glad that we did. The three days of conference proper flew by so fast (that's how you know it was interesting) and we covered so many topics - from automation uptake in Nigeria, to sysadmin tips, to RFID, to digital resources and so much more.

One of the major takeaways for me was the passion and willingness to discuss and share ideas among the attendees. There are certainly challenges here, with unreliable power, not great internet, and of course as it is libraries, funding. But what there isn't here is any sense of fatality, people are working hard to make things better, and to serve their users to the best of their ability.

Apart from the conference proper, for the cultural day we went to the Sacred Grove in Osogbo, Osun which is a world heritage site, and for good reason. It is a truly beautiful place.

We probably didn't get as much done at the Kohacon Hackfest as we could have, but the internet made that a little hard. We did however explore some monitoring tools that can help deal with the symptoms of unreliable power - a key concern. I hope that it was some use to the participants.

It was an honour to attend Kohacon in this special location. I hope that I provided some useful information for others, I certainly learnt from them. A big e se (thank you in Yoruba) to Projectlink Konsult, and to Catalyst for making it possible for me to come. And e se to all the other participants who made the conference what it was.

You should have been here.

See you at Aristotle University, Thessaloniki, Greece next year for Kohacon16!